Shabbat Shalom! This evening begins the observation of Yah’s Holy Day, Feast of Weeks also known as the Feast of Pentecost.

Feast of Pentecost (Feast of Weeks) Observation video link should be found later at: https://youtu.be/SEHzMzULv08

The Pentecost feast is commanded by YHWH to be celebrated 50 days after the first weekly Sabbath following the Feast of First Fruits (Lev. 23:15-22).  It always falls on the first day of the week (starting the evening following the Sabbath) and is still commanded to be kept today by the followers of the Anointed One, Yahshua, forever.  It commemorates the pouring out of YHWH’s Spirit (Word of Prophecy) to the Hebrew Israelites in Acts 2 as well as the giving of the law to Moses during the wilderness period.

2020 HOLY DAYS STARTING THE EVENING OF:

Shalom! Tonight at even begins another of Yah’s months. HalleluYah!

Shalom this evening begins another of Yah’s months.  .

1 Samuel 20:18  Then Jonathan said to David, To morrow is the new moon: and thou shalt be missed, because thy seat will be empty.

Psalms 81:3  Blow up the trumpet in the new moon, in the time appointed, on our solemn feast day. 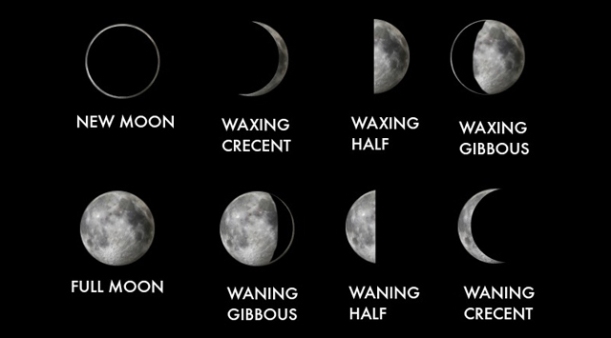 Shalom, this evening begins the last day of the Unleavened Bread Feast week.

Tonight’s Feast Observance it to be located at this link: 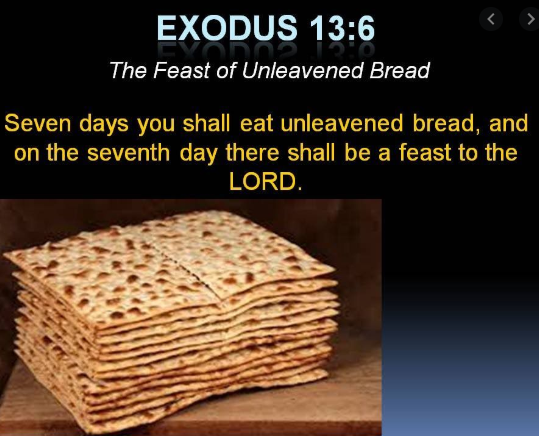 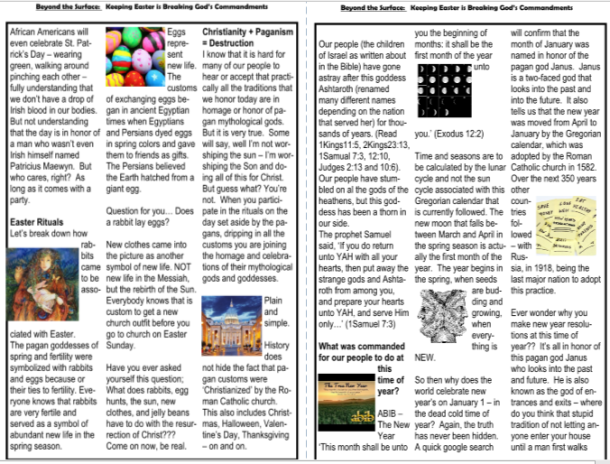 Feast of First Fruits Observation Video is to be found here:  https://youtu.be/ehHF0L3ubw8

The Hebrew Historian Josephus documented the keeping of the Hebrew Holy Days:

The Antiquities of the Jews,

And How Each Day Of Such Festival Is To Be Observed.

5 “. . . . beginning of our year, on the fourteenth day of the lunar month, when the sun is in Aries, [for in this month it was that we were delivered from bondage under the Egyptians,] the law ordained that we should every year slay that sacrifice which I before told you we slew when we came out of Egypt, and which was called the Passover; and so we do celebrate this passover in companies, leaving nothing of what we sacrifice till the day following. The feast of unleavened bread succeeds that of the passover, and falls on the fifteenth day of the month, and continues seven days, wherein they feed on unleavened bread; on every one of which days two bulls are killed, and one ram, and seven lambs. Now these lambs are entirely burnt, besides the kid of the goats which is added to all the rest, for sins; for it is intended as a feast for the priest on every one of those days. But on the second day of unleavened bread, which is the sixteenth day of the month, they first partake of the fruits of the earth, for before that day they do not touch them. And while they suppose it proper to honor God, from whom they obtain this plentiful provision, in the first place, they offer the first-fruits of their barley, and that in the manner following: They take a handful of the ears, and dry them, then beat them small, and purge the barley from the bran; they then bring one tenth deal to the altar, to God; and, casting one handful of it upon the fire, they leave the rest for the use of the priest. And after this it is that they may publicly or privately reap their harvest. They also at this participation of the first-fruits of the earth, sacrifice a lamb, as a burnt-offering to God.”

The Unleavened Bread Feast Day one Observation video is to be located here:  https://youtu.be/cuqPA-elqE8 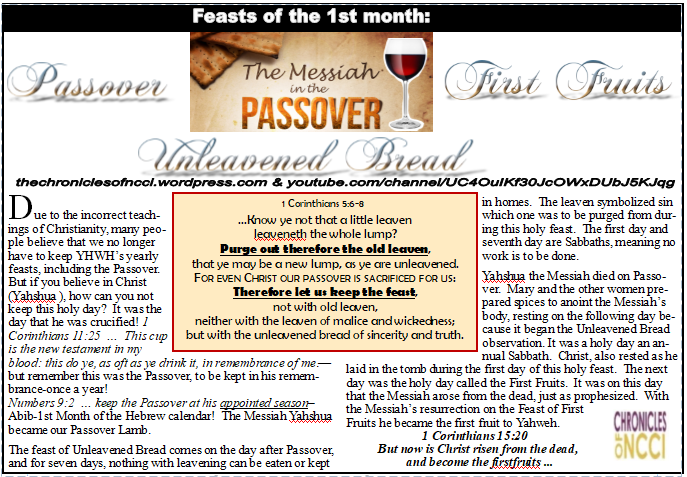 1 Corinthians 5:6  Your glorying is not good. Know ye not that a little leaven leaveneth the whole lump?
7  Purge out therefore the old leaven, that ye may be a new lump, as ye are unleavened. For even Christ our passover is sacrificed for us:
8  Therefore let us keep the feast, not with old leaven, neither with the leaven of malice and wickedness; but with the unleavened bread of sincerity and truth.

HallelYah!!! Passover Greetings and May Yah Bless and keep you.  During this time we must show our faith through our works and obedience to our Creator alone.  We must not allow the spirit of fear to alter our journey of following the pattern that our Messiah, Yahshua has shown for us and has been a sacrifice for us.  400 years are almost upon us and the fulfillment of the Most High’s Word.

We often remember the account of Daniel and the Lion’s Den as a test of faith, but let’s examine another test of faith found in our Greek Hebrew captivity:

As a reminder of keeping the faith, please read the following passage.  Maccabees is one of the historical books chronologically placed between the Old Testament and the New Testament.  It chronicles the history of Hebrews during the Grecian Empire.

18There was an elderly and highly respected teacher of the Law by the name of Eleazar, whose mouth was being forced open to make him eat pork. 19-20But he preferred an honourable death rather than a life of disgrace. So he spat out the meat and went willingly to the place of torture, showing how people should have courage to refuse unclean food, even if it costs them their lives. 21-22Those in charge of the sacrifice had been friends of Eleazar for a long time, and because of this friendship they told him privately to bring meat that was lawful for him to eat. He need only pretend to eat the pork, they said, and in this way he would not be put to death.

23But Eleazar made a decision worthy of his grey hair and advanced age. All his life he had lived in perfect obedience to God’s holy laws, so he replied, “Kill me, here and now. 24Such deception is not worthy of a man of my years. Many young people would think that I had denied my faith after I was ninety years old. 25If I pretended to eat this meat, just to live a little while longer, it would bring shame and disgrace on me and lead many young people astray. 26For the present I might be able to escape what you could do to me, but whether I live or die, I cannot escape Almighty God. 27If I die bravely now, it will show that I deserved my long life. 28It will also show a good example of the way young people should be willing and glad to die for our sacred and respected laws.”

As soon as he said these things, he went off to be tortured, 29and the very people who had treated him kindly a few minutes before, now turned against him, because they thought he had spoken like a madman. 30When they had beaten him almost to the point of death, he groaned and said, “The Lord possesses all holy knowledge. He knows I could have escaped these terrible sufferings and death, yet he also knows that I gladly suffer these things, because I fear him.”

31So Eleazar died. But his courageous death was remembered as a glorious example, not only by young people, but by the entire nation as well. 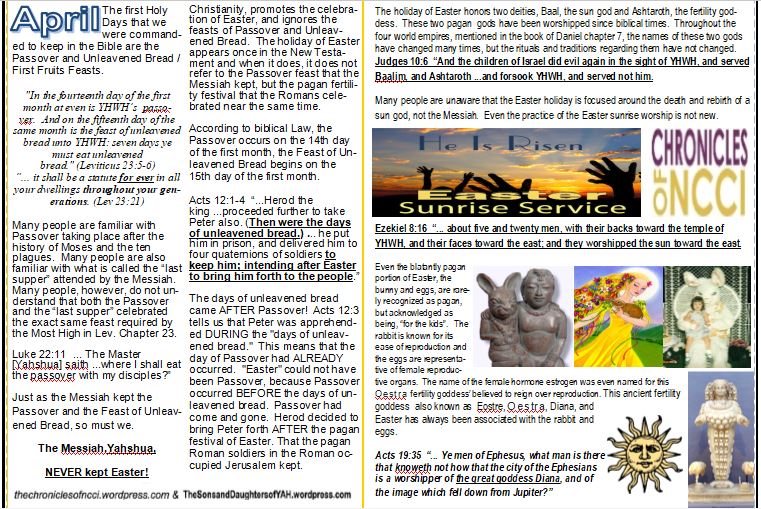 Do You Really Know What Fat Tuesday Is????

The Chronicles of NCCI
Create a free website or blog at WordPress.com.