Biblical history shows that the Most High YHWH designated the first month and beginning of the year to take place in the spring, in the month of Abib, not in the dead of winter in January.

According to the Holy Bible, the first month of the year, is named Abib.

Exodus 12:2  “This month shall be unto you the beginning of months: it shall be the first month of the year to you.”

This month falls between the months presently known as March and April.  The fact that the beginning of the year started in the spring was well known throughout the ancient world. The later adopted “April Fool’s Day” is a testament to that!

It was during the time of ancient Roman Empire that the times were changed.   Emperor Julius Caesar declared that a total change in the calendar system was to be made.  This calendar system went from a lunar based system that used the moon’s phases to determine time, to a solar or sun based system.  Previously, the occurrence of the new moon began the new month,  the word moon comes from the word moon.  On the new moon, the beginning of the month, there is nothing to see, the new moon is the darkest time of the month. 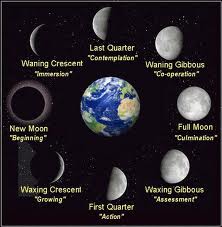 for a total of 4 seasons in a year.

This new calendar, called the Julian calendar, later updated again to the Gregorian calendar, moved the date of the beginning of the year from the spring to the winter.

Daniel 7:25  “And he shall speak great words against the most High, and shall wear out the saints of the most High,and think to change times and laws…”

The month is known for the pagan holiday of St. Patrick.  On St. Patrick’s Day everyone, is promoted to wear green and “be Irish”, but what is the underlying meaning? The  wearing the color green was believed to please the Irish earth goddess enough for her to “bless” them with plentiful crops.   As far as the use of the shamrock, this too is a relic from earlier religions.  Long before the Irish accepted Christianity, they held the shamrock as sacred.  The Women’s Encyclopedia of Myths and Secrets, by B. Walker stated this in reference to the shamrock, “Due to its green color and overall shape, many viewed it as representing rebirth and eternal life. Three was a sacred number in the pagan religion and there were a number of “Triple Goddesses” in ancient Ireland…”  Later when Christianity was brought to that part of Europe, the same shamrock symbol continued to be honored and held as sacred, only at that time, it was said that the shamrock represented not the old pagan religion, but the pagan Trinity doctrine instead.  So wearing green on “Saint” Patrick’s Day equates to honoring pagan rituals and deities.